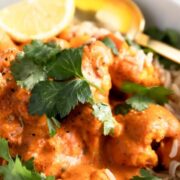 This delicious and savory vegan cauliflower tikka masala is inspired by the traditional Indian tikka masala. It's made with roasted cauliflower combined with a savory and spicy plant-based sauce. Serve it with your favorite grain or naan and it's sure to become a family favorite.

Whenever I go out to eat at an Indian restaurant, one of my favorite dishes to order is a paneer tikka masala. If made well, it's usually exploding with flavor and taste, but usually leaves me feeling sleepy and bloated.

This cauliflower tikka masala is a plant-based version of one of my favorite Indian dishes and so easy to make at home.

What is tikka masala?

Tikka masala is a spiced Indian curry sauce. It's creamy and has a vibrant orange color. and made with a cream base, ghee or oil, a medley of spices, and usually combined with paneer, an Indian cheese, or chicken.

This recipe uses coconut milk as the base instead of a dairy base. It's just as delicious but also adds a subtle sweetness. The spices overpower the taste of the coconut so you'll enjoy this combination even if you're not a huge fan of coconut milk.

The roasted cauliflower makes a delicious substitute for the traditional paneer or chicken.

When it comes to any kind of tikka masala, spices are important. The combination of spices is what brings this dish to life.

For this cauliflower tikka masala, I picked Indian spices that easy to find in most grocery stores:

How to make a cauliflower tikka masala

Once you have all of the ingredients, this dish comes together in less than an hour.

2. Prepare the tikka masala: While the cauliflower is roasting, prepare the tikka masala sauce. In a blender, combine the coconut milk, tomatoes, water, garlic, ginger, and spices. Blend until smooth and creamy. Transfer to a large pot over medium heat. Bring the mixture to a slight boil and immediately reduce the heat to low, cover, and let simmer for about 15 minutes.

Pro tip: If you don't like a subtle taste of coconut milk, substitute the coconut milk with cashew cream by blending ¾ cup of raw cashews with ½ cup of water.

Once your tikka masala is ready, you have a few options on how to serve this delicious dish. Here are my favorites:

Store leftovers in an air-tight glass container. Be sure to cool the tikka masala down before doing this. When you're ready to enjoy it, just warm it up in a pot.

The sauce may have thickened so feel to add a few tablespoons of water to bring it back to life.

I hope you love this cauliflower tikka masala recipe as much as I do. Sign up for email updates to receive new recipes delivered to your inbox or check out my new cookbook Plant Power Bowls. 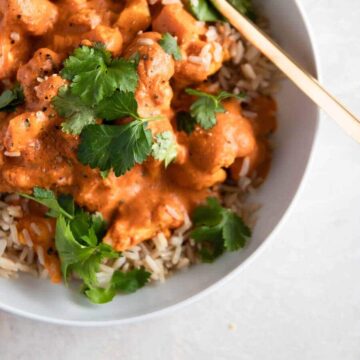 5 from 8 votes
Print Pin Rate
Prep time: 10 minutes
Cook time: 40 minutes
Total time: 50 minutes
Servings: 4
Calories: 189kcal
Author: Sapana Chandra
This delicious and savory cauliflower tikka masala is inspired by the traditional Indian tikka masala. It's made with a savory and spicy plant-based sauce and cooked with delicious roasted cauliflower. Serve it with your favorite grain or naan and it's sure to be a crowd-pleaser.