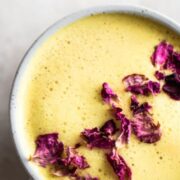 Creamy turmeric latte, also known as golden milk or turmeric milk, is a delicious warming Indian beverage. Made with hints of warming spices, you'll love this simple recipe with a handful of ingredients.

This recipe is especially close to my heart because I grew up drinking this. My mom would make me a cup of golden milk before I'd go to bed.

This easy golden milk recipe can be enjoyed anytime. It also makes a delicious nighttime beverage to unwind. You'll need the following ingredients:

How to make a turmeric latte

Detailed ingredient measurements, instructions, and notes can be found on the printable recipe card at the bottom of the page. Here’s a summary:

1. Combine ingredients: In a small saucepan, whisk milk, turmeric, cinnamon, ginger, and black pepper. Bring it to a simmer.

2. Simmer: Lower the heat and simmer the mixture for 5 minutes. Turn off the heat and add sweetener, if using.

3. Strain and serve: Using a strainer, pour into two cups.

I love topping my latte with a sprinkle of ground cinnamon or these beautiful dried rose petals.

Pro tip: To create a frothy beverage, use a milk frother or pour the mixture into a blender and blend until frothy.

How much turmeric does the latte need? A little goes a long way. You only need ⅛ teaspoon per serving.

Does it contain coffee? No.

I hope you love this golden milk recipe as much as I do. Sign up for email updates to receive new recipes delivered to your inbox or check out my new cookbook Plant Power Bowls.

Editor's note: This recipe was originally published on February 26, 2018. Since then, it’s been freshened up with new pictures, commentary, and made even more delicious. 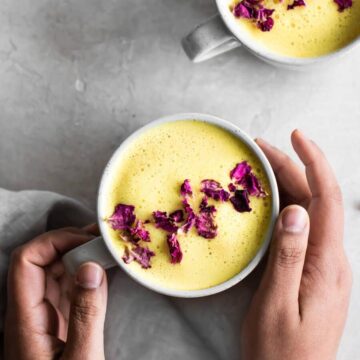 *To create a frothy beverage, use a milk frother or pour the mixture into a blender and blend until frothy. Note that turmeric will stain your blender, so immediately rinse it with soap and warm water.  Substitute honey with maple syrup or another sweetener , if vegan.